Tetra World Adventure is a puzzle game by Bloom Mushroom. Recently an enhanced version of it made its way to Nintendo Switch, but the mobile version has been around, free of charge. Since the Switch version is only available in Japanese store, I played the iOS version instead. It’s not that I don’t have the money to buy it. No. Not even close. I want to emphasize it is not the case.

It’s a short puzzle game with moderate difficulty. I’m no expert in puzzle games, and without hints this game took me 2 hours to beat. If you are looking for a nice and relaxing otherworldly adventure, feel free to pick up this game. For free.

By the way, it took me some effort to find out the maker of the game. Appstore says the developer is norihiro hanazono, but a search of it leads me to some game news site instead of the author themself. Then I opened the in-game credits, only to be surprised that the author is not there. When I was about to give up, I noticed the signpost in main menu, which was like

The mysterious text struck me with awe. Google says Bloom is the name of an app that helps you sleep and meditate, and another app that helps you create melodies by tapping circles. But the link between mindfulness, circles and this little puzzle game is yet unknown.

Also I was wondering what a “mash room” is for. Maybe it’s a little room in a factory downtown. Workers are streaming in and out with wood bats over their shoulders. They mash things there: they mash potatoes, tomatoes, and radios. The mash is made into salads and sold countrywide. The first line the workers say when picking up a phone is “mash mash”.

Anyway, this led me to the author’s twitter, and I linked it above.

The game is a point-and-click adventure. Each door in the main menu represents a stage, and in each stage, you travel between rooms, grab tools and items to solve the puzzle. 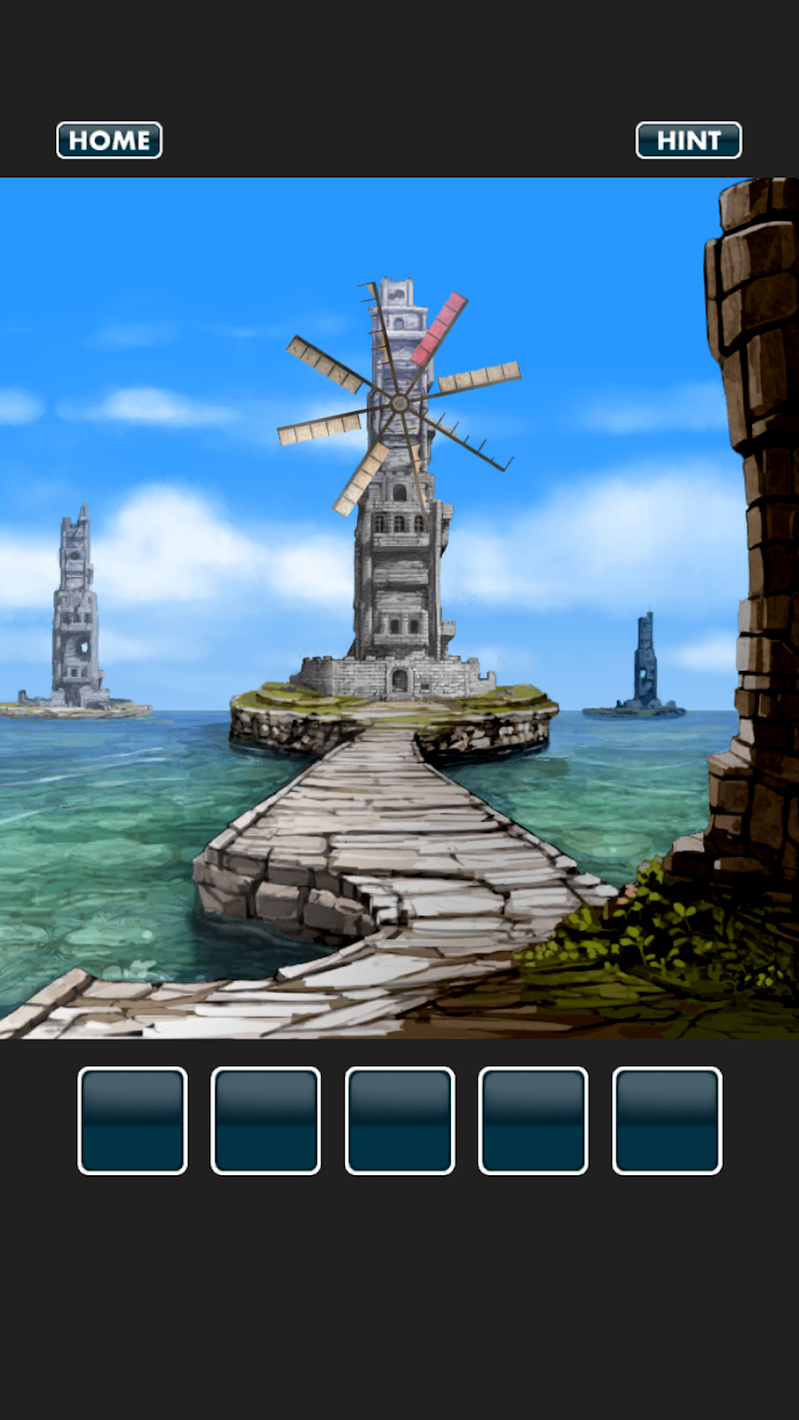 This game doesn’t have a lot of items, and they don’t interact with each other. And the main difficulty comes from inputting the code. The player should look around carefully for clues that corresponds.

For example, in the beginning of the game, the player has to solve a puzzle made up of five sliders. Each slider has two states: up or down. And in the same room, we find out that the fish hanging on the wall has exactly five bones pointing up and down, and entering their direction solves the puzzle.

As the player ascended to the top of the tower, there’s a girl quietly standing there, writing in a book. It turns out this magical world is the girl’s creation. Her vivid dreams.

As the player progress through the game, puzzles become more and more complex. In a stage, the player needs to enter three code correctly to obtain a key. In another stage, they need to count fishes of each type, and multiply the counts by their price to get the final result. Some earlier puzzles may come back, but with a twist. Take the fish bone puzzle in World 1 for example, it comes back in World 4. However, unlike in World 1, the number of bones exceeds the digit of the code. Therefore the player must find out which bones are related to the code, and which are not.

When the player finishes World 4, expecting to find the girl, what greets them is her sudden disappearance. And the story behind the story slowly reveals. I will save the fun for the play here. But be prepared for the story that carries a tinge of sadness. If you’ve listened to Prisoner / Paperplane(a series of vocaloid songs), you will feel familiar with the plot.

I’ve always wanted to be lost in imagination. The azure sky. The tall grass. The ray of sunshine. A shelter from reality. However, as time goes, I find my self getting lost in everyday sundries, in sensual excitements — I am losing my self in reality. Just like a breeze flowing through the wind bell. Tetra reminds me of that. I felt myself liberated, like the bird, flapping its wings, to the end of the sky.

Thanks Bloom Mushroom for the fantastic journey. And if you read this article and enjoyed the game, it is my highest pleasure.

Edit: I played the slide princess by the same author, and that is also a nice puzzle game with some secrets and suprises.